“… a simple answer to the people who always insist that we must be having massive fiscal stimulus because we have a big budget deficit; my answer is that the deficit is a result of the depressed economy, but how do we show that without getting too much into the weeds?

Well, hereâ€™s a quick and dirty approach. Suppose that spending and revenues would, in the absence of the slump, have risen at 5 percent per year â€” roughly GDP growth plus inflation, and actually a bit slower than actual spending growth (6 percent per year) from 2000 to 2007. With this assumption, I can draw three charts for the federal government (using CBO data) and one for state and local (using FRED) that, I think, tell the story.

First, most of the surge in the federal deficit is about plunging revenue. In the figure below, the â€œNo recessionâ€ line shows what would have happened if federal revenue had grown 5 percent per year after 2007: 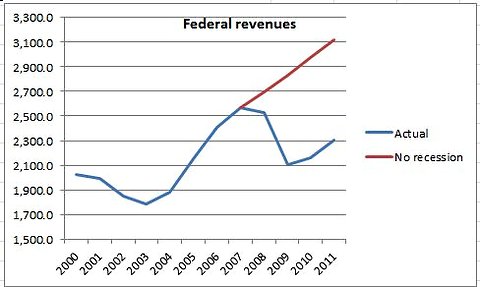 Thatâ€™s about an $800 billion per year shortfall.

What about spending? Well, it is higher than you would have expected in the absence of the slump, by around $300 billion: 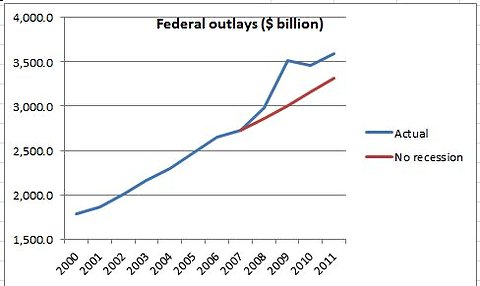 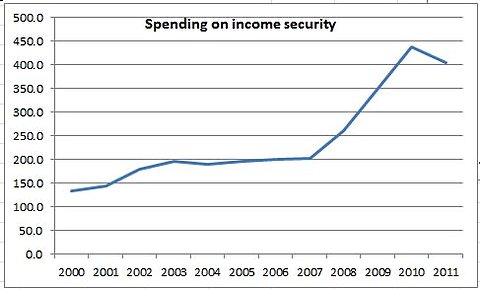 Income security spending is, of course, strongly related to the state of the economy. So are some other forms of spending â€” Medicaid, of course, but also things like disability insurance, where people on the cusp are more likely to seek the benefits if they canâ€™t find work.

So basically, the federal deficit is all, yes all, about the recession and aftermath.

And meanwhile, there has been austerity at the state and local level (calendar years here instead of fiscal, but thatâ€™s not crucial): 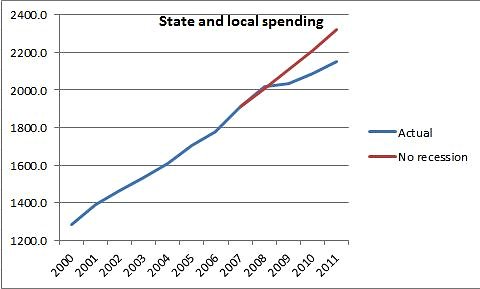 So the reality is that we have deficits because the economy is depressed, but relative to previous policy weâ€™ve been imposing fiscal austerity, not stimulus.”

This entry was posted in Uncategorized. Bookmark the permalink.